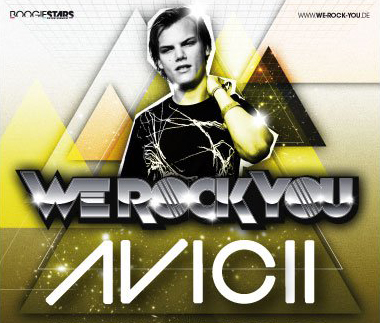 Last friday some friends and me took the 170km drive to a little town called Melle to visit the Sfera Grand Club where We Rock You, that’s the name of the party, presented Avicii. After an about 1.5 hours long drive, we arrived at the club where already stand in the line. From the outside, the club looked just like a new hall and not very special but as it turned out this club is really brilliant.

Inside the club the entry already looks well designed and you can see that the club owner really had the plan to build something special. We first took a look at a littler room but we actually stayed there only some seconds because we wanted to see the main floor. So we didn’t check out the whole club, but you can believe me that the main area is just so amazing that you won’t regret having not seen the other floors. The main room has a good  sound system, a lot of lasers, confetti roll-ups and they also had two portable nitrogen canons. This already sounds pretty cool and I’m sorry that I can’t describe the entire construction but the most amazing thing at Sfera was the huge LED wall at the end off the main room just behind the dj booth which is located about 15m in front of the back wall. I added this video and hope that you can get an impression how stylish this club is. If you will ever have the chance to be there it’s definitely worth going there. Maybe it’s one of the best designed clubs in Germany.

Enough about the club, let’s talk about the party and especially Avicii‘s gig. The last time I’ve seen Tim was on the 30th April 2010 so almost a year has passed. The warm-up dj played some tracks with a dirty dutch touch and tracks like the bootleg of Diddy’s “Hello Good Morning” by Erick Morillo and Eddie Thoneick or “Nothing better”, which is also done by them.

At about 2.05 am Avicii started. His first track was his edit of “Glimma” by Pryda with the accapella of “Star 69” by Fatboy Slim. The crowd went crazy and when he then started playing his Kings of Leon bootleg (Abow vs. Sex is on fire) it musically just get better and better. Other tracks he played were the Axwell, Dimitri Vegas and Like Mike remix of David Tort’s “One Look”, “Swede Dreams” by himself, “Release” by Third Party, “Teenage Crime”by Adrian Lux in the remode version of Axwell and Henrik B.

One of the highlights was surely when he played “One” by Swedish House Mafia and the old SHM logo flashed on the huge LED wall behind the booth. The best track for me was Avicii‘s upcoming “ID” but also his remix of Tom Hang’s and Shermanology’s “Blessed” was pretty intense. “Penguin” was also a nice track but not a highlight in opposition to his “Hang With Me” remix and of course the chart hit “My feelings for you” worked pretty well.

Tim played for about 2.5 hours and we all had a lot of fun but to be honest his mixing skills are still not the best but I guess for the normal people who just came to enjoy his music it was a brilliant night even if the crowd wasn’t the best.

Before Tim’s gig I also had the chance to talk to the organisator and I can just suggest you to check out the upcoming parties of We Rock You because there will be some REALLY big acts! If you’re based in Germany and you like to party you might check out their facebook page.

All in all it was an amazing night and I can’t wait for the upcoming announcement. Believe me I surely will be their one or two more time this year and I will keep you posted about it.

Thanks to Pieschi for cutting the videos!!