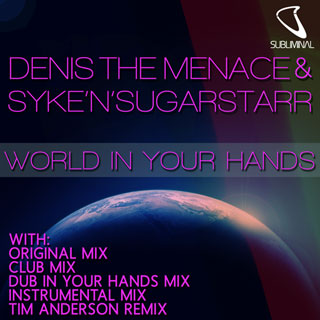 FINALLY! The long wait from the first time we heard this beautiful peace of music is over and “World In Your Hands” by Denis The Menace and Syke N Sugarstarr is finally out on Erick Morillo’s label Subliminal Records.

This track has been played out plenty of times by the label boss himself before it was officially announced as an upcoming track on his label and with a signing like this the German based producers definitely reached another level as electronic dance music has its climax and has never been that huge before!

“World In Your Hands” comes in five different versions and after some proper listening sessions we came to the conclusion that the club mix works best for us followed by the original mix.

The club mix gives the track – like expected – some more power which is making the stunning progressive record sounding bigger and evocative but the original mix can also be chosen as a favorite it just depends on how you build a set and in what kind of mood you or the crowd for which you are playing.

Besides these two versions, there is a dub mix, an instrumental version and a electro-house remix by Tim Anderson which in our point of view had not to be featured on that release because we are not the biggest fans of that kind of electro house which is being played almost everywhere in the world.

All in all a well done track by Denis The Menace & Syke N Sugarstarr and hopefully they will continue working together so we can expect more results like this!